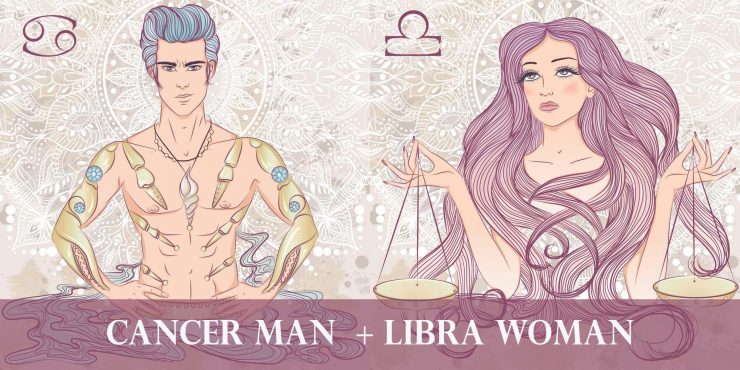 The relationship in this couple can be characterized by a common phrase: nothing comes easy. To achieve a harmonious relationship, the Cancer man and the Libra woman need to go through a thorny path, overcome many obstacles, put a lot of effort and work. But in the end – they have a chance to get true beautiful love. Although, the risk of not going through this difficult path and being left with nothing after hard work is also great.

First of all, it should be noted that Cancer man and Libra woman are two radically different people. This seems like a disadvantage at first glance. But if you look closely, this is an opportunity to learn a lot from each other. And besides, in a couple, to get a good addition to your character.

When love flares up between a Cancer man and a Libra woman, their sensual relationship is full of vivid impressions and unusualness. This is the virtue of combining different characters.
One of the main problems of compatibility of a Cancer man with a Libra woman is that they have different channels of perception of love. He feels loved when he is taken care of, is shown deep feelings and emotions. In a word, for him, her love is perceived mainly in a sensual equivalent. And this is such a subtle, elusive and difficult to prove substance.

But a Libra woman feels loved when she is presented with gifts, original dates, and vivid impressions into her life. For her, love is a celebration. The stumbling block in these relationships can be his touchiness, ultra-emotionalism, vulnerability, rancor, and hermitage.

But on her part, relationships will be harmed by inconstancy, frivolity, volatility, and unreliability.
Both of them should learn to understand each other, show tolerance for the characteristics of a partner, strive to guess, and fulfill his desires. After all, love develops when the desires of one partner coincide with the capabilities of the second. If they do not coincide by nature, you can slightly correct them.

Elon is Cancer and Talulah is Libra. In 2008 Elon divorced his first wife and met Talulah. Later in 2010 they married, but in years they “felt out love” and in 2012 divorced being in good relationships. But in 2013 they remarried again! Apparently, feelings were still some where out there. In 2014 Musk filed for divorce again, but withdrawed it. Nevertheless in 2016 Talulah did the same and they split for good being still good friends.

Willem is Cancer and Giada is Libra. They have met in 2004 on the film premiere. Just year after Willem proposed and they got married. She is director and he is an actor so they work together, have much common interests and share a passion for cinema. It seems like true love.

Vanessa is Libra and Brian is Cancer. They both starred in ‘Beverly Hills: 90210’ and dated few years until in 2001 became engaged. In 2002 they welcomed their son. Sadly, despite matrimony plans, they split soon after his birth.

But it didn’t ended with that – ex-spouses have fought over custody and that period was messy. For now drama seems to be calmed down, but both Vanessa and Brian are distant, the only thing they have in common is their son.