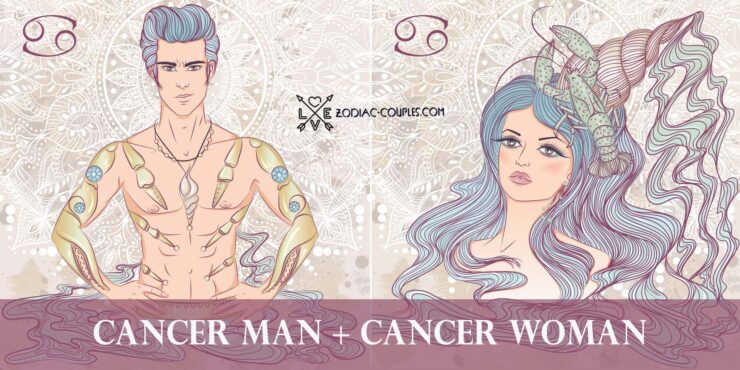 The Cancer man and the Cancer woman have excellent compatibility and understanding of each other literally at the level of intuition. Partners do not even need to talk about their desires and needs, as they immediately feel and understand everything. Cancer man is very sentimental, which at first will seem very sweet and sensual to a woman, and later may start to annoy, since women of the water element prefer strong and self-confident men. This sign depends on others’ opinions, so if they want to be together, they should do everything to please their partner’s family.

There are downsides to the fact that the signs are similar in their characters. They are very touchy and vindictive, trying to punish their offender with silence or scandal. In this case, it will be difficult for them to agree since someone will have to be the wiser one. Also, partners are looking for strong, stable, and reliable relationships. They do not tolerate procrastination and hate cheating. Cancer men and women will not endure but break off the relationship.

Richard is Cancer, and Joan is Cancer. The couple first met in 1976, and Richard realized that he wants to spend his life with this woman. Their touching story began when he found out which store Joan works at and began to go there, often buying things that he did not need. That worked, and after a while, they began to date. Even after two years of relationship, she was not sure of him, but he wanted to move mountains for her. Richard bought the island, which he could not even afford at first, and 11 years later, they got married there.

The couple has two children and lives together for a happy 40 years now. Richard never regretted falling in love with this woman.

Sharon and Trevor are Cancers. The couple met in 1979 at casting in Filumena and tied the knot the next year. They have three children together. Even after 40 years of marriage, they look like newlyweds and have a great time together.

However, it’s not always rainbows and butterflies. As Sharon herself says, it never happens that in 30 years, you have never hated a partner. Not always everything went smoothly, and not always they could agree. She does not hide that there were thoughts of divorce, but they overcame all difficulties. She also mentions that they never had an open marriage, although it is trendy now.

Dagmara and Patrick are both Cancers. The couple tied the knot in 2005. They have two sons together. In addition to a happy family life, the partners also successfully work together on projects on the set and enjoy it. They often appear together at social events and are not shy about showing love for each other in public. They seem to have their own personal secret of a hot relationship.

Donna is Cancer, and Dan is also Cancer. They met, starring together in Doctor Detroit. After a year of dating, the couple got engaged and got married in 1983. They have three daughters together. For 37 years of marriage, the couple was not involved in any scandals; there were no divorces and betrayals. They live a long, happy, and faithful life together and have stood the test of time.

Marc is Cancer, and Busy is Cancer. The two tied the knot in 2007 and have two children together. They love each other, but in their relationship were issues that appeared with their parenting. There was news that Busy wanted to file for divorce due to the unequal distribution of parenting responsibilities with her husband. They managed to revise their agreements, and the husband adjusted the schedule for the family.

However, lockdown 2020 was also difficult for partners. They were constantly together and took shifts with the children. Partners value their personal space very much and suffer when it is taken away from them.