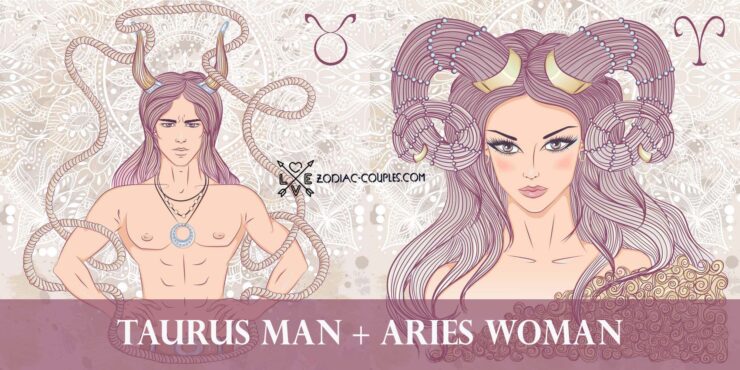 The Taurus man and the Aries woman have completely different temperaments. Still, they are well suited to each other for a long relationship. Taurus man is very calm, level-headed, and remains cold-blooded and judicious in all situations. Aries woman is full of energy, enthusiasm; she is very energetic and active. A woman is a magnet for a man in this union. She inspires her chosen one, fills their relationship with positive emotions and new impressions. He, in turn, gives her stability, reliability, and protection.

The conflict in a couple is brewing when their relationship goes through the first stages, and they begin to get used to each other. Aries woman starts to be annoyed by his monotony, and she becomes bored. She also begins to suffer from a lack of emotion from her partner. On the contrary, Taurus man does not understand why the lady spends her energy so much on trifles while he tries to save his energy as much as possible.

To maintain the relationship, the couple is encouraged to keep the fire of love between them, which seems difficult over time. They should also value each others’ personal space and not violate boundaries. The signs should not try to remake their partner, as they will not become the opposite of themselves. The union has enormous potential. Being wise enough, Aries and Taurus can inspire a partner to conquer new heights and achieve unprecedented success.

David is Taurus, and Victoria is Aries. The two met in 1997 at a charity football match. It was a flash of love, and a year later, they announced their engagement. Victoria and David got married in 1999, a couple of months after their first child’s birth. This couple immediately became idols in UK. During the marriage, they had 4 children.

Victoria has been a style icon for many years, which allowed her to create her own brand, and David actively developed his football career. Partners became the best support and inspiration for each other, which was reflected in their success. They continue to develop, raise children together, and love each other madly.

Al is Taurus, and Lucila is Aries. In total, the couple has been dating for about 10 years. Their relationship began in 2009. Lucila said that she dreams of marriage and children with this man in her interviews, even though he is more than half her age. She was not embarrassed by the age difference, and they felt comfortable.

However, Al Pacino is a famous bachelor, and although he is well over 70, he has never been married. The couple broke up in 2015, and the possible reason is that Al did not want to get married. They had frequent disagreements. However, in 2017, the couple had a short reunion; they still parted the next year completely.

Harvey is Taurus, and Daphna is Aries. Their relationship began in 2001, and they got married in the fall of the same year. The couple has a mutual son, Roman, who was born in 2004.

A serious test fell on their relationship initially, since Harvey’s ex gave birth to a son in 2001. The ex-lover had to go to court for child support, as Harvey had not been replied for 6 months. However, the married couple’s relationship has successfully passed this test; they are raising a son together and are still happily married.

Emma is Aries, and Greg is Taurus. The two met on the set of Sense and Sensibility in 1995. Emma was still married to her previous husband at that time, but it didn’t last long, and in 2003 Thompson and Wise tied the knot. They have a daughter together and an adopted son.

Emma has consistently made provocative statements about marriage, arguing that every married couple needs to take a break, that monogamy is weird, and that no working woman can be a good mother. However, Greg fell in love with her precisely for this. They happily live a small family. Greg loves keeping his house clean, and Emma absolutely loves it.

Kunal is Taurus, and Neha is Aries. They met in 2008 at the opening of a new bar. Friends introduced them. For Kunal, it was love at first sight. They chatted for 3 hours and later spent nine days together. Towards the end of his India tour, Kunal realized that he did not want to part with Neha and invited her to Los Angeles. The couple got married in 2011. They have no children yet. There is a strong emotional bond between the partners, mutual respect, and trust, and over the years, this has only grown stronger.