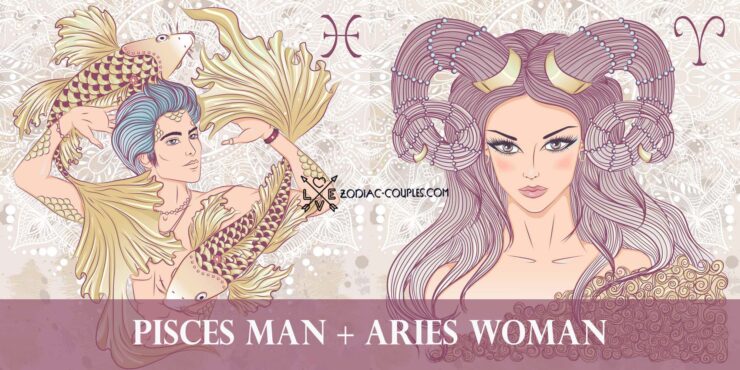 The relationship between the Pisces man and the Aries woman will not be easy, as there will be trials, disagreements, and attempts to agree. This is when partners will have to work on the quality of the relationship all the time. They belong to the elements of water and fire, have different temperaments and views on life. Here partners will have to seek a compromise constantly.

Aries woman is very emotional, explosive, and sometimes conflicted. The Pisces man is very calm; his love is moderate and quiet. On the one hand, a woman will constantly lack emotions in a relationship with him; therefore, she will lead to conflicts. On the other hand, a man is a kind of meditation for her. Aries do not know how to relax, and Pisces catches Zen and passes it on to their woman.

The way of how the relationship began will decide a lot. Aries is looking for a confident, strong, and persistent man, and Pisces is timid and acts carefully. Therefore, between the signs, everything moves slowly but surely. Partners face trials of fate to test their feelings, and they will successfully cope with them. Signs learn to work in a team, and they have a chance to build long and happy relationships. The main thing is to learn to accept and understand the differences between partners.

Alyson is Aries, and Alexis is Pisces. The couple met on the set of Buffy, but they did not immediately start dating. This was not a typical story since Alyson fell in love first, and Alexis refused her a relationship, fearing a connection with a colleague and that it will ruin their friendship. However, in 1999, they took a risk and got married in 2003 in a secret ceremony. The partners managed to create an amazingly strong family. They have two daughters. They are all having a great time together, creating traditions, renewing their vows, and cannot withstand a long separation.

Sarah is Aries, and Freddie is Pisces. The two met on the set of I Know What You Did Last Summer in 1997 and started dating in 2000. They were highly demanded actors with busy schedules, but that didn’t stop them from developing their relationship, and the couple tied the knot in 2002. After the birth of two children, the partners completely surrendered to parenting and made their schedules so that one of them was always with the children. By the way, therefore, there is a great chance that the partners will no longer work together on projects because there will be no one to stay at home. After 20 years of marriage, their relationship has only improved, but they are also constantly working on this.

Patricia is Aries, and Thomas is Pisces. The couple met in 2001 due to their mutual friends. They didn’t rush in their relationship and tied the knot five years later in 2006 in Italy. There were ups and downs between these two, and in 2009 they filed for divorce but reconciled, trying to work things out. Although, in 2010, they renewed their divorce, which was officially finalized in 2011. They have one daughter together.

Danny is Pisces, and Bijou is Aries. The two met at a poker tournament in Las Vegas and started dating in 2004. After five years of dating, the pair announced their engagement and tied the knot in 2011 in a private castle. They have one daughter together, born in 2014. Their relationship was going through hard times, with Danny being accused of rape several times. Despite all the difficult processes, she always stood in his defense, and they managed to save the marriage.

James is Pisces, and Kimberly is Aries. The couple got married in 2010 in Israel. They built a huge happy family and have five children together. Although their family life isn’t cloudless and without miseries, since in 2020, the pair announced the miscarriage, it wasn’t the first time. James previously said that it was the 5th miscarriage. The partners are full of inexhaustible love for each other and continue to live on.

Gary is Pisces, and Moira is Aries. They got married in 1981 and since that time never separated. They have three children together.

The two are together for 40 years and still have the fire in their hearts. As Gary says, the secret of their long and solid marriage is a sense of humor. Even after all these years, Moira manages to surprise him and make him laugh. They already have their first grandchild.