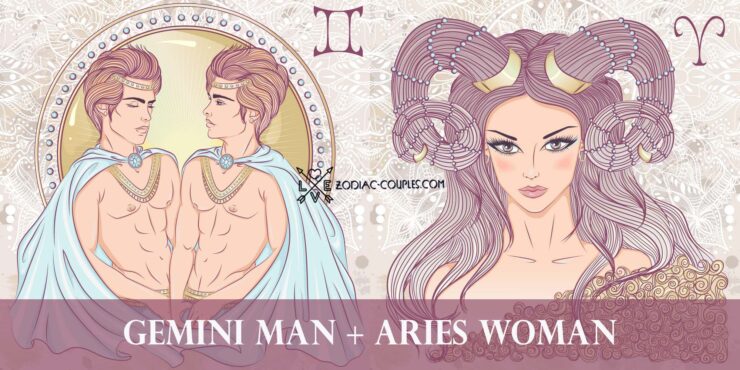 At first glance, it may seem that the union of a Gemini man and an Aries woman has no chance because their elements are absolutely opposite: Aries is fire, and Gemini is air. This opinion is a gross mistake; since the signs make up an ideal tandem, their relationship promises to be long, strong, and happy. Besides, the partners also manage to cooperate professionally and only reach great heights successfully.

The first meeting of a Gemini man and an Aries woman is always something unusual. From the first moment, the partners immediately feel a connection and attraction that they do not understand. This is not surprising because, in a relationship, partners always become like-minded people and a single team; they feel and understand each other perfectly.

Their relationship is not boring. Aries is a very bright, outgoing, ambitious, and emotional woman, and Gemini loves it. Partners will always find topics for conversation, they will meet guests and mutual friends at home, and joy and laughter reign at home. Over time, partners only develop and strengthen relationships through conversations and openness.

Signs positively influence each other in achieving goals and ambitions. They inspire and support, instilling incredible confidence. Problems can arise only because of one of the partners’ jealousy, but this is rare.

Kate is Aries, and Matt is Gemini. The couple met at the Coachella music festival and started dating in 2010. They announced their engagement in 2011 when Kate was expecting their child. The son was born the same year in July. Although, in 2014, they announced that the engagement is called off, and they split up. As Hudson later commented on the separation, they have a different vision of life and priorities and decided to move independently.

Later Kate met another Gemini – Danny Fujikawa ❤. The two had known each other for 15 years before they started dating. Their first debut as a couple was in 2017. The next year they announced that they were expecting their baby girls. Kate has two more children from previous relationships. Kate and Danny are extremely happy together. As Hudson notes, the best part of their relationship is that she always feels love, no matter what. Danny treats her like a queen and loves children. Both appreciate time together, and even quarantine in 2020 had a positive impact on their relationship.

Claire is Aries, and Hugh is Gemini. They met on the Evening set in 2006. There was a spark between them, and the two got married two years later in a secret ceremony. The couple has two children together. When Claire met Hugh, she had a vow to stay single, but falling in love ruined her plans. The partners managed to build a happy marriage full of love and to work together successfully.

Guy is Gemini, and Jaime is Aries. The couple met in 2009 in Israel. Their relationship was challenging due to the distance between them for the first several years. However, the couple passed the test of destiny and, in 2012, tied the knot and stayed in Los Angeles. They have two daughters together.

Nattiv said that time apart was hard for both because there was a 10 hour time difference and 7,000 miles between them. They invented their own method and every day filmed diary videos for each other expressing their day. They managed to keep the fire of their love, and it seems that their relationship develops every year to be better.

Jill was Aries, and Alfred is Gemini. The couple met in 1984 and got married in 1986. The two had an age gap, and Jill was 16 years older. They had no children together. However, Alfred adopted two of her children from the previous marriage and had a daughter from his previous relationship.

They lived a long life together; till her death at the age of 83 years, the couple stayed married. Jill suffered from Alzheimer’s and ended her way in a special hospital since she needed special care that her family couldn’t provide anymore. She died in 2020, but in 2019 Alfred already had another relationship. It is not thought to be cheating since he devoted all his time to take care of his wife and loved her till the end.

Ali is Aries, and Justin is Gemini. The two met in 2010 at a wedding reception, and Ali immediately fell in love. Justin was attracted after visiting one of her comedian shows. They tied the knot in 2014, but Justin’s family made her sign a prenup before the wedding. That fact motivated her to succeed and to have her own money to be independent. They welcomed two kids into their marriage. The pair dealt with tough times in their life as miscarriage and used drugs. That was a dark time in their lives, although they coped with that successfully.

Other Gemini and Aries famous couples