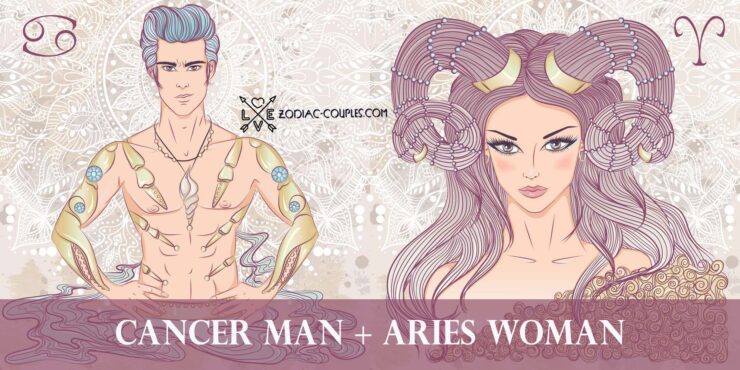 First of all, the Aries woman and the Cancer man look great together. However, not everything is so good in other areas. These signs are so different as if they are from different poles. Partners often quarrel, sort things out, and can’t come to an agreement even on the smallest things.

Aries woman is very freedom-loving. A man shouldn’t limit her in her desires and actions, so Aries is inclined to fight for her space. On the other hand, Cancer is very domestic and family loving, ready to stay in the house and devote all his free time to his family.

This does not mean that the signs have no future because there are many happy couples. Their secret is that they allow themselves to quarrel, but they do not focus on this. Still, they are looking for benefits for the relationship.

Roselyn is Aries, and Eric is Cancer. The couple met in 2005 in Los Angeles, and in 2007 Roselyn said yes to Eric’s proposal. They got married a few months later. Partners are the complete opposite of each other, they argue about any issue, but they cannot imagine more love. Apart from family, the couple tried working together and enjoyed it so much that they decided to continue this trend. They created a podcast project, and as such, they found a great use for their relationship controversy. The couple has two children.

Mariah is Aries, and Tommy is Cancer. The couple got married in 1993 when Mariah was still very young at 23 years old, and he was 21 years older. The history of their relationship is famous for its nightmares. They are now viewed as abusive and toxic relationships. Although her career took off after marrying him, it did not bring her happiness. He controlled her every step, career, communication, and even movement outside the home. She recalls this period of time with quiet horror. Although, not so quiet, as she revealed her details of marriage in her memoirs. They got divorced in 1998.

Jennifer is Aries, and Scott is Cancer. They tied the knot in 2000, and only three years later, in 2003, separated. It is known that Jennifer regrets her marriage to Scott even after so many years. Not so much about the marriage itself as about the fact that she had to experience a divorce. According to her, it was a crushing experience for her. She was too young for such a step as a wedding. The true reason for their separation is not known. Jennifer said in an interview that the Hollywood lifestyle is to blame: people are not used to saving but quickly get rid of what does not work as it should.

Shannen is Aries, and Kurt is Cancer. The couple met in 2008 when Kurt was married. Their relationship began with a friendship. However, after his divorce, they began dating and got married in 2011. Shannen’s diagnosis of breast cancer was a huge challenge for their family. Such events do not go unnoticed, and, usually, couples either break up or only get stronger. This couple went through the dreaded fourth-degree cancer treatment process side-by-side. Both changed, and their relationship grew stronger. We wish Shannen health and long life.