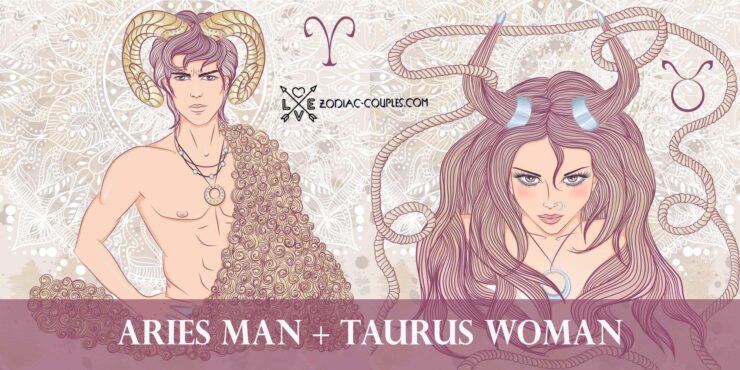 Aries man and Taurus woman can build a truly strong and long relationship, but they need to arrive at a consensus. Both signs are very stubborn and do not want to give up their positions. There must be common interests, views on life, and goals; otherwise, such couples quickly part.

The Taurus woman attracts a man like a magnet. He sees in her the very incomprehensible one that he wants to conquer. The man will definitely have to win the lady’s heart since she will not rush.

Couples who still manage to reach an agreement live a long and happy life together, full of support, trust, understanding, and love. The secret of a couple’s strong relationship is to accept the strengths and weaknesses of the partner, understand them, and not try to change the partner.

Lily is Taurus, and David is Aries. The two met on a dating app Raya. They tied the knot in 2020 in Las Vegas after a year of dating. Lily has two daughters from her previous marriage. The couple posts cute photos of their family life and spent lockdown in a close family circle during the coronavirus pandemic in 2020.

Renée is Taurus, and Kenny is Aries. The couple met in 2005 and tried hard to keep their relationship private before coming out. One week after they showed up to the public, the two got married. The marriage tale lasted for four months, and then Zellweger filed for divorce annulment with the reason “fraud.” The reason for their divorce was the fact that the partners did not see the meaning and purpose of this marriage, and you cannot build a marriage without a common concept of what is acceptable for both.

Renée is Taurus and Ant is Aries, people call them an unexpected match, but now their relationship is quite serious. They both met each other on a set of his show Celebrity IOU Joyride in 2021. They kept their relationship secret, but they were pictured together on July 4th, 2021. And later, Renee Zellweger made their relationship Instagram official.

Prior to dating Renee Zellweger, Ant divorced ex-wife star, Christina Haack. From his first marriage, Ant has three kids who got along with Renee quite well.

Kirsten is Taurus, and Jesse is Aries. The couple met on the Fargo set in 2016 and started dating more than a year later. They started from a friendship, and Jesse always knew and wanted her to be in his life. The couple got engaged and a year and a half later welcomed their beloved child. It seems that fate itself brought them together, and they did not want to resist such events in their lives.

Michelle is Taurus, and David is Aries. They got married in 1993 and have two children: a son John and a daughter Claudia. The process of the daughter’s adoption, Claudia, started before the meeting with David, and when they started dating, the relationship started with parental duties. It was a hard time to give love and care to the child and try to build a new relationship, but it was the most right time, as Michelle admits. As can be seen, they did their best in that challenge and, in 2020, celebrated their 27th anniversary.

Uma is Taurus, and Gary is Aries. The couple met in 1989 and the next year got married. They got divorced in 1992. Only a few years later, they started to comment on their marriage. Before this time, no one even knew how exactly they met. Uma was only 18 when they started dating, and he was 12 years older. That was her first love. Both partners agreed and called this marriage “a mistake” in their further interviews. Uma also admits that it was a teenage marriage; nobody counts such.

Russell is Aries, Danielle is Taurus. The couple met in 1989 on The Crossing set. That time started their periodical relationship till the two tied the knot in 2003. They have two children before the separation in 2012 and the final divorce in 2018. Russell was very upset about the divorce. He sold all the things related to their family life. It is known that to this day, he loves her very much and hopes that she will change her mind and return.

Amber is Taurus, David is Aries. They met in 2007 when they had a flight together. The two engaged in 2011, after four years of dating, and one year later got married. The couple has one daughter together, born in 2017. The couple is believed to have one of the strongest relationships in Hollywood, and after the years, it becomes only stronger. The secret of success of the Tamblyn and Cross union is the acceptance of their strengths and weaknesses.

Francis is Aries, and Eleanor is Taurus. The couple met in 1962 while working on Dementia 13, where Eleanor worked as assistant art director. They got married in 1963 when she got pregnant. They have three children in their marriage, and one of them tragically died. Eleanor had to do a titanic job to build her career, out of the influence of her husband’s famous name, and she succeeded. The couple is still married to this day and continues to do their life’s work.

Oona was Taurus, and Charles was Aries. The couple met in 1942 when she was auditioned for one of his films. The next year they got married, and the age gap was extreme since he was 53 and she was only 18.

They had eight kids together and were married till Chaplin’s death in 1977 at the age of 88. Oona was the biggest love that he was waiting for his entire life. As Charles said, he never knew what happiness is and how it feels till he met his wonderful and beloved wife. When Oona died in 1991 at the age of 66, she was buried next to his husband to spend eternity together.