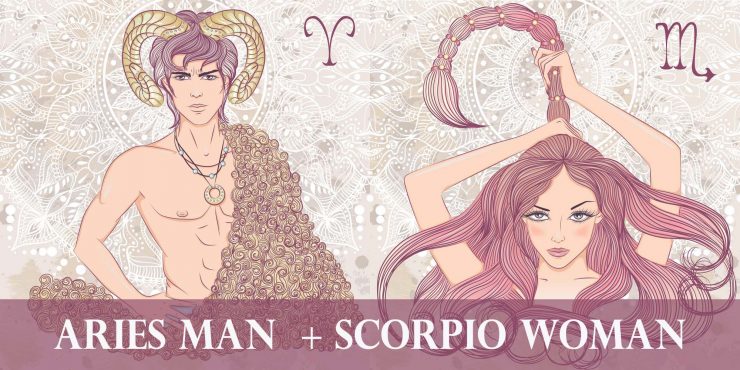 The union of Aries and Scorpio is not simple – in their relationship there is no escape from jealousy, quarrels, resentment, selfishness on both sides. But with due effort, a subtle emotional connection and a strong love attraction is established between them – if they are in love and are ready to remake themselves, then their union can be ideal. To do this, a woman needs to become more restrained, wiser, and a man – more sensual and tolerant.

Of the many couples in love, Aries men and Scorpio women, only a few maintain their union for all their lives, while in each crisis they have to rethink relationships, and work on them daily. Both signs are considered strong, stubborn and even a little aggressive. In addition, Aries is “fire” and Scorpio is “water”. But a determined Aries respects courage, and this is the main quality of a Scorpio woman. She lives in search of truth, and Aries always speaks the truth. Astrologers see many positions on which Aries and Scorpio can find common ground.

Quentin is Aries and his wife Daniella is Scorpio. They met years ago, in 2009 and was dating on and off since then, until in 2017 Quentin proposed to her. He said that he never married before because he haven’t met perfect girl. And apparently, it is Daniella. In 2020 they welcomed their first child. And to judge by the way Quentin shouted out his love to Daniella on the Golden Globes – they are totally fine together.

Robert is Aries and his wife Susan is Scorpio. Their love story is not so usual – they met in 2003 on the movie set when Robert was just after rehab and trying to recover to normal life. It wasn’t love from a first sight, but eventually those different personalities ended up together and today they are married with two kids. Susan was the one who could push Robert to life without drugs and to build a succesfull career. They both inspire each other and make each other better.

Seth is Aries and Lauren is Scorpio. They met back in 2004 at a party and felt mutual attraction. After few years of dating they got married n 2011. Seth told few comic situations regarding their personal life to media and we are certain that he and Lauren not bored together. They also do charity to raise awareness about Alzheimer’s and it brought them closer.

Anne is Scorpio and Adam is Aries. Their first encounter happened at film festival in 2008 and they describe it as a love at first sight. They dated till 2012 when the couple got married. Tey have two sons. Anne says that Adam’s love changed her for the better.

Sean is Aries, and Ashley is Scorpio. The couple met at the bar The Cobden Arms, which is located next to Sean’s house. He went there regularly, but she came for the first time with friends. A connection immediately appeared between the partners. Sean had already been divorced four times, so he would not marry again, but Ashley changed everything. The couple kept the privacy of the relationship. They got engaged in 2013 and got married in 2017. Sean even began to think about children with a lover. Both partners are very temperamental, and in 2020 there was a scandal in the press about a drunken showdown that they had on the plane. However, they do not plan to get divorced, so this is just the rhythm of their relationship.

Other famous Scorpio and Aries couples

Meg Ryan (Scorpio) and Dennis Quaid (Aries) 💔 – they starred in a movie together in 1987 and started dated year after. In 1991 they married and had a son, but in 2000 they split due to problems such as Dennis’ cheating, although the media accused Meg because she started seeing Russel Crowe. Later she confessed that their marriage felt painful sometimes.

Christopher Lambert (Aries) and Sophie Marceau (Scorpio) 💔 – they have met on a film set in 2007 and dated privately, being together on red carpets. In 2014 they split as friends, apparently passion just faded away.