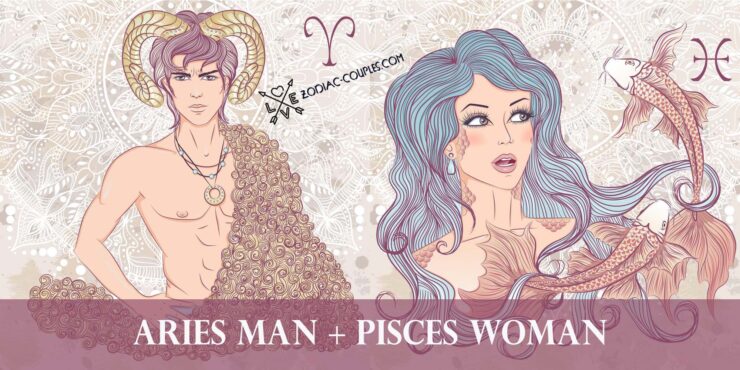 The relationship between an Aries man and a Pisces woman will be incredibly intense, vibrant, and passionate in the most positive sense. These two characters are examples of perfect compatibility. Their temperaments compliment each other perfectly: he has a true man’s qualities, and she is a truly fragile woman. She has many fears, and he, as a knight, is courageous and protects her in everything. It will be very interesting for them together.

A couple’s problems can arise when the Aries man begins to play a brutal man and shows the severity of character and passive aggression – the Pisces woman is very vulnerable to this kind of behavior. However, conflicts in this couple are an important part of the manifestation of their love. Through quarrels and disputes, they get to know each other as individuals, recognize each other’s needs in relationships, and build personal boundaries.

Another problem may be that their relationship will become boring, and the woman, due to her calm temperament and serenity, will not notice it. However, this couple is capable of any difficulties. They will be able to build a long, happy relationship and a healthy family.

Leonard was Aries, and Susan is Pisces. The couple tied the knot in 1989 and lived together till Leonard’s death from lung disease in 2015. That was a second marriage for both spouses. They had no children together. They were married for 26 years.

Hayes is Aries, and Ali is Pisces. They met on the Homo Erectus set and, in 2009, got married. In 2015 the couple welcomed their second child, a daughter Vivienne. Paparazzi catch a couple for romantic walks, meetings with relatives, and cute expressions of love. They seem to be doing great.

Eva is Pisces, and José Antonio is Aries. The “Desperate Housewife” and businessman met on a blind date due to their mutual friend. The couple got engaged in 2015 and in 2016 tied the knot. In 2018 Eva gave birth to their son.

The couple shines from happiness together; Eva cutely calls him Mr. Fancy Pants. José is a highly private person and doesn’t have social media, unlike his wife, who likes sharing moments of her life on Instagram. They went to compromise: when she shares photos, José chooses the one he likes, and usually, it’s with no his face visible.