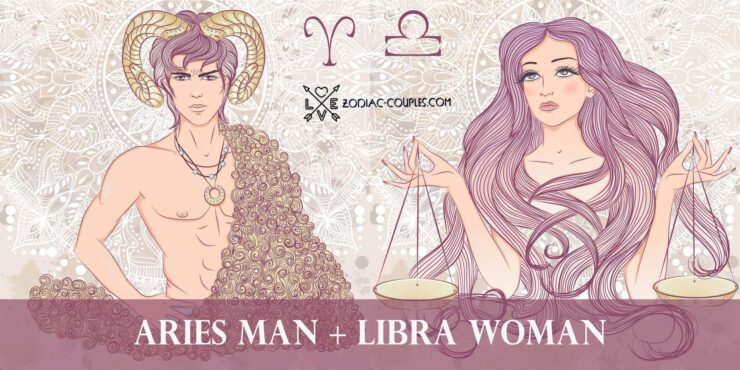 The pair of Aries man and Libra woman has excellent compatibility in all areas of relationships. Their union is powerful since partners are not inclined to quarrels and disagreements; they always discuss everything and are ready to make concessions to their partner. Together, they constantly improve and learn something new and do not try to remake a partner to please themselves. Aries and Libra work as a team, as one mechanism, and achieve their goals with double power and speed.

A man is a conqueror by nature, and a woman allows him to do it. It is vitally important for her to be looked after, complimented, and admired, and the man feels it. Libra woman loves to test the partner’s nerves, to flirt, and avoid direct answers. Aries man loves everything to be direct and clear and does not tolerate understatement. Her manner would provoke him, but he cannot resist the charm of a woman.

In union, Aries man and Libra woman follow one important rule: discuss everything, make concessions, and find a compromise. This approach provides them with a very long, strong, and honest relationship. Partners never get bored, as they will always see how to spend time together and what to talk about.

Marion is Libra, and Guillaume is Aries. There was more than a decade long friendship between these two before they started dating in 2007. The couple has two children together, and they are not married. In 2011, Canet said about his chosen one: it is an amazing feeling to find your woman with whom you move in the same direction and understand that you are in love.

There was a scandal around Marion that she was connected with the divorce of Angelina Jolie and Brad Pitt, but she denied everything and at that time was expecting a second child from her boyfriend.

Michael is Aries, and Alicia is Libra. The couple first met on The Light Between Oceans set. In 2014 the two started dating, and after three years of relationship tied the knot in 2017 in a private ceremony in Ibiza. This couple is one of the most low-key in Hollywood. They have no children together yet.

Chris is Aries, and Melissa is Libra. They met on the set of Supergirl Season 2 and started dating in 2017. The couple announced their engagement and got married in 2019. Recently, the couple has announced that they are expecting their first baby together, and it seems that their marriage becomes only stronger and their relationship closer.

Martin is Aries, and Nancy was Libra. The pair met in 1972 and tied the knot in 1980. They have three children together, and Dolman took a break in her career to bring them up. That was a long and happy marriage, full of love and support. Unfortunately, in 2010 Nancy died of ovarian cancer. This is a huge loss for her husband. As he says, their marriage was triumphant. And even after so many years after her death, he feels her presence near and speaks to her from time to time.

Neve is Libra, and JJ is Aries. They have been dating since 2011, and the following year they announced expecting their first child. In 2018 the couple adopted a son. Neve and JJ are not married in their almost decade-long relationship, but they feel comfortable together, and it seems they are in a mood to expand their family.

Avril is Libra, and Deryck is Aries. The couple started dating in 2003 and tied the knot in 2006 when Avril was 22 years old. Although, their marriage didn’t last long, and in 2009, they filed for divorce. The pair separated on a very positive note. The two maintain a close friendly relationship even a decade later after their split up.

Kelly is Libra, and Mark is Aries. The two tied the knot in May 1996 and have three children together. They met in 1995, co-starring in All My Children as love partners. They never had rings, but on their 10th anniversary, the two decided to get the one for Kelly. They are business partners, parents, relationship partners, and best supporters of each other. It has been more than twenty years together, and they are doing great. Kelly shares nice photos of her partner and their whole family on her Instagram.