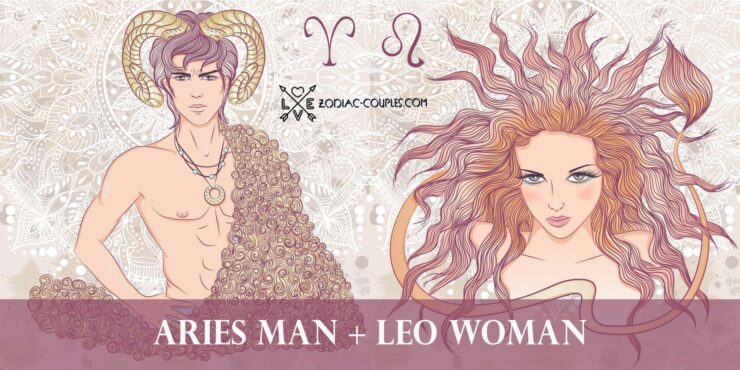 The compatibility between Aries man and the Leo woman is very good. The marriage will be happy if these two learn to yield, or at least try not to compete. This union is not only strong and durable but also unique. Both partners light up like matches because both the Lioness and Aries belong to the element of Fire.

Despite the fact that the relationship between an Aries man and a Leo woman creates one of the most successful zodiac alliances, quarrels and conflicts often arise in this couple. As a rule, the reasons are: their jealousy, outbursts of aggression and selfishness, persistent defense of their own point of view.

Their happiness depends only on their efforts to break out of the vicious circle of grievances, quarrels, and stormy reconciliations.

These signs of the zodiac are the best fit for each other in terms of emotions and feelings. They reveal themselves in this union, where honesty reigns and they manage to find an approach to each other. A Leo woman with an Aries man can be gentle and pliant, which can amaze others.

Both zodiac signs of the fire element are born leaders. Partners often struggle for supremacy in relationships, but with a wise approach, everyone wins. They need to recognize each other’s leadership. The struggle will weaken, and they will be calm and reliable in a relationship.

Vera is Leo, and Renn is Aries. They met in 2004 on the set of Touching Evil due to their mutual friend Allen Hughes, Vera was already divorced. They got married in 2008 and have two beautiful children. Vera and Renn are happy together and, among other things, are investing in real estate in different countries. Vera loves to share photos of her beautiful family on social media. There is no doubt that they are doing great.

Paul is Aries, and Julie is Leo. The history of this couple’s relationship is long, beautiful and, we hope, will only end with a long and happy old age together. They got married in 2003 but started dating back in 1995. The couple has two children. Paul and Julie have been together for 25 years. Still, their personal life is so private that everyone can only guess the secret of their successful relationship. Well, whatever they do is definitely works.

Sean is Aries, and Georgina is Leo. The couple started dating in 2006, and in 2008 got married. Unfortunately, their marriage didn’t last long. In 2010 they got divorced. It is known that their relationship was turbulent, and several times police arrived at their house. Georgina was the fourth Sean’s wife and the shortest marriage in his marital history.

Jesse is Aries, and Sandra is Leo. The couple met in 2003. In 2005 they got married, Sandra became a step-mother of his three kids. Jesse cheated on Sandra in 2010, and that year they got divorced. The scandal is discussed in the press even a decade later.

Kaitlin is Leo, and Rob is Aries. They met at the casting for the It’s Always Sunny in Philadelphia project, where McElhenney hired Kaitlin Olson to play one of the roles. After two seasons of the series, he began to fall in love with her, and in 2008 they got married. They have two children. They are perfectly able to continue working on the project to this day and have a happy family life.

Gillian is Leo, and Peter is Aries. The couple started dating in 2016. The two immediately built personal boundaries in their relationship and chose that it would be better for them not to live together. They worked side by side on the TV series Crown. The partners decided that it was much better for them to see each other than to live together all the time since it would negatively influence their union. Due to the busy schedule of both in 2020, they decided to break up but remained good friends. Peter even started dating another actress but later reunited with Gillian. In 2021, they are together in the Czech Republic, so she works on a project there.