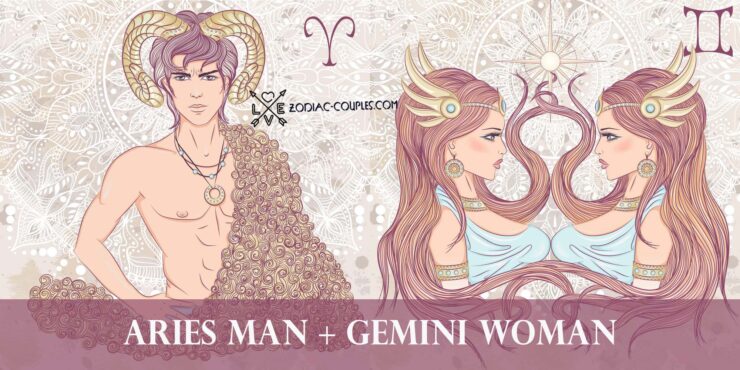 By nature, the Aries man is very restrained, traditional, and persistent, which cannot be said about the Gemini woman. This lady is the complete opposite. Her character is tough to keep track of. Gemini’s mood and decisions constantly change, which contradicts Aries’ stability. Hot temper, and thirst for new things perfectly describe her. Aries is very serious about the institution of marriage and very quickly achieves his chosen one. It is sporadic when Aries dates for a long time before marriage.

When assessing the compatibility of these zodiac signs, it is worth paying attention to an important contradiction. Aries man is very jealous and domineering; he wants to control everything. What does the Gemini woman think of this? She constantly provokes jealousy and drives him crazy.

A woman wants him to move mountains for her sake from the first meeting. She is scared by the conformity of a man. Such games of a woman cannot last forever. If she is used to maintaining friendly relations with former partners and periodically returning to them, Aries is very strict in his decisions and burns bridges.

Sean is Aries, and Abigail is Gemini. They met on a set of Sharpe. Working together as a team in that project highly influenced their relationship, and in the end, they fell in love and got married in 1997. They have a daughter together, born in 1998.

Unfortunately, their marriage was not destined to live long, and in 2000 the couple officially divorced. Their daughter lived with Sean along with his children from previous marriages. Needless to say, that Abigail was his third wife, and he was married two more times.

Warren is Aries, and Annette is Gemini. The two met in 1991 on Bugsy set. Their first child was born less than a month after the movie’s premiere, and a couple of months later, they got married. Warren and Annette have four children in 28 years of marriage. The couple is happy together, and with warmth in their hearts, remember when they fell in love with each other.

Paulette was Gemini, and Charles was Aries. When they first met, Paulette was only 22 years old, but she told him that she was 17. The fact that she was 21 years younger (26, according to what she claimed) did not stop Charles, and the couple got married after a while in 1936. Their marriage lasted 6 years, and in 1942, the couple resorted to a Mexican divorce, as it was the fastest and easiest way at the time.

As it is known, Paulette decided to divorce. Charles was very jealous and tried to keep under control not only Paulette but also her career, projects in which she participated. Ultimately, her patience ran out. The couple had no children.

Marilyn was Gemini, and James was Aries. This was the first marriage for the then Norma Jeane (it is the real name of Marilyn Monroe). The couple got married after a couple of months of dating when Marilyn just turned 16. She moved with her husband and, as he once said, “was just a housewife.”

However, when James joined the Merchant Marines and was on duty, Norma Jeane began her career and was ready to file for divorce by his arrival. As James himself commented, her decision was influenced by Fox’s company, which refused to sign a contract with her while married. Norma dreamed of a career.

James lived a long life, and the fact that he knew Marilyn before her brilliant career and fame played a huge role. Journalists constantly wanted to ask James about Marilyn’s early years, to which he had one answer: “I did not know Marilyn Monroe, and what she was, I knew and loved Norma Jeane.”