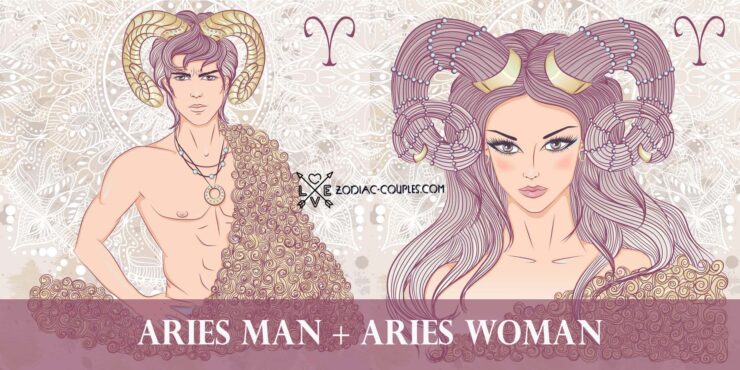 Aries man and Aries woman are personalities of a zodiac sign characterized by special irascibility, stubbornness, and the desire to take a leading position in relationships. In these relationships, it will not be quiet and calm. There may be frequent quarrels, relationships, and attempts to build a hierarchy.

Relationships between Aries men and women will develop rapidly. They do not like to waste a lot of time on courtship but prefer to go straight to the heart of the matter. And if a woman does not react to a man’s attention for a long time, he will quickly lose interest and look for another lady.

There will be many contradictions and reasons for conflicts in their pair. Aries are very freedom-loving, stubborn, purposeful, and independent. For partners to build a long-term relationship, they must learn to accept their couple’s needs, outlook on life and eliminate pressure.

Sarah is Aries, and Matthew is Aries. The couple met in 1991 on Broadway, where he directed a play and was introduced by her brothers. The first meeting impressed Broderick, and in 1992, he called her to ask her out on a date, soon after which they began dating. In 1995, the couple decided to stage the play How to Succeed in Business Without Really Trying together. Together they spend all their free and working time, because of which Matthew started to worry that this would worsen their relationship, but the partners only became closer and got married in 1997. They have three children. The couple is doing well to this day, and the secret of their relationship is investing in each other, and it’s not about finances. Relationships are difficult to work, and you need to decide whether you are ready to do it all the time or not.

Cobie is Aries, and Taran is also Aries. They met in 2005 when Killam was filming an episode with Paul Campbell, who knew Smulders. They got engaged in 2009 and got married in 2012. They had two daughters in the marriage. When they started dating, both were 22 years old. Smulders admires her husband and how they managed to walk the hard way of growing up together at 20. Both look very happy, and there has never been any bad news darkening their paradise.

Clark is Aries, and Jennifer is Aries too. The couple started dating in 2000. When they got married in 2001, they were already expecting a daughter in a few months. The partners were united not only by the relationship and the daughter but also by the love for their work. So they reunited for the filming of The Road to Christmas in 2006. Having lived together for 20 years, the partners announced their divorce by posting a joint photo on Instagram. As the couple stated, they broke up at the beginning of the year and decided to formalize the divorce. This decision was made by them with tears, but they remain a family, tey love and support each other.

Charlie was Aries, and Lita was Aries. They first met when Lita was 8 years old, and Charlie was 17. Later she began acting in his film The Kid, and when she was 15 years old, he invited her to star in the Gold Rush. Then this tragic relationship for a young girl began.

At 15, she became pregnant with Charlie, who was 25. It is known that at first, he was in no hurry to get married and forced her to have an abortion. But they got married in Mexico in 1924 when Lita turned 16, and they were silent about the birth of a child for a couple of months so that there was no suspicion that he was conceived before the wedding. Thus, Charlie tried to avoid punishment. After the wedding, he told the girl that he would do everything to make her hate their marriage. They divorced in 1927 due to his absence from home, constant betrayal, and inhuman treatment of a very young lady. They had two children, and the divorce document contains 50 pages describing everything that he caused her in marriage.

Mariah is Aries, and Bryan is Aries too. Initially, the couple had an exclusively professional relationship since he was one of her group’s dancers in 2006. After 10 years, news broke about their romantic relationship. They spent holidays together and shared photos of their time. In 2017, they broke up for short, but after the reunion, they began to work on the relationship with renewed vigor, and now they are doing well.

Other Aries and Aries famous couples