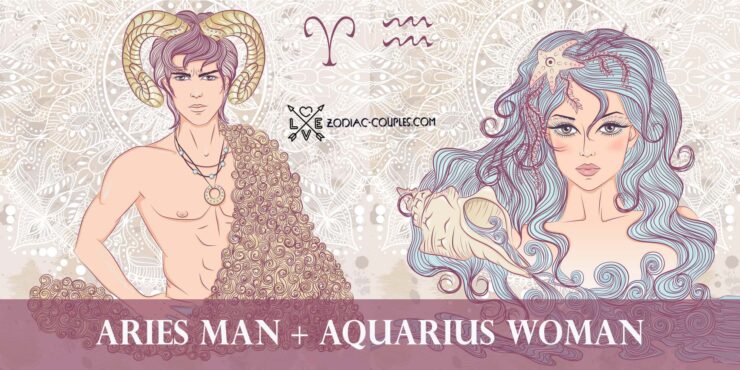 Aries man and Aquarius woman find attractive precisely those qualities that they lack in each other. Both signs are active and purposeful so that the relationship will not prevent them from achieving what they want and climbing the career ladder. The signs are very open and honest; they do not accept lies and hypocrisy. The partners will be comfortable together; they are very decisive and quickly build relationships.

There is a scenario in which a couple will not be able to build a romantic relationship, and they will separate. Still, partners do not burn bridges, and more often, they remain good friends and maintain contact.

Problems can arise when Aries man does not have enough attention from his chosen one since she focuses more on herself. Aquarius woman will get bored because she loves variety and movement and may not get enough of it from her partner.

Mia is Aquarius, and Andre was Aries. The first news about their relationship appeared in the late 1960s when Andre was still married, but already in 1970, they had twins together. Later, the couple had two more children, one of them they adopted.

Their relationship ended in divorce, but they remained in perfect friendship. After his death, Mia posted on social networks a tribute and memory of her ex-spouse in the form of their old photo together.

Christopher is Aries, and Diane is Aquarius. The couple met in Paris in 1984, promoting “The Cotton Club,” and in 1988, tied the knot. They have one daughter together, who is in modeling. The two filed for divorce in 1994, but they support each other and maintain a good relationship even after more than a decade.

Sherman is Aquarius, and Christopher is Aries. The couple met in 1989, and in 1995 they got married on the beach in Malibu. During their marriage, he was actively building his career, and both partners were constantly traveling for work. It was not an easy period for both spouses, but they passed it successfully, and they have two children.

The couple is considered one of the strongest in Hollywood because they have been building a successful marriage for more than 20 years. Both still managed to build a career, and they are the best support and fans of each other.

Jennifer is Aquarius, and Vince is Aries. The couple met in 2005 on the set of romantic comedy The Break-Up. The press was holding their breath waiting for news about this couple, and so it happened, they began to date. The paparazzi often caught them together, but both partners did not want to confirm or deny rumors that they were together and discuss their relationship until it became obvious. In 2006, there were rumors that Vince cheated on Jen, but they were denied. However, a month later, the couple broke up. Vince stated that they are still in close contact and constantly communicate. Jennifer also speaks only positively about him.