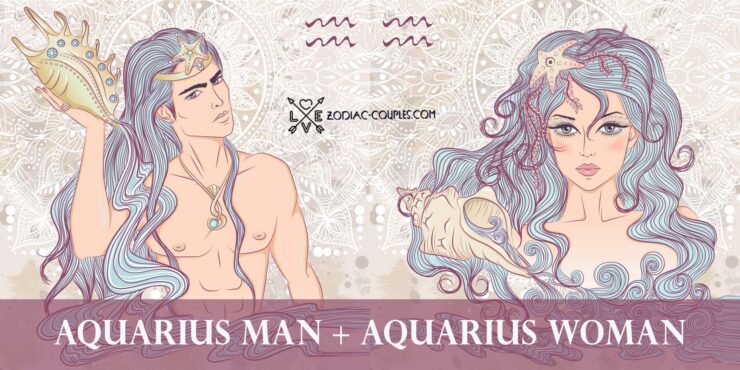 The relationship between an Aquarius man and an Aquarius woman will certainly be interesting. Aquarians are by nature individualists who have been looking for their soul mate for a long time. This sign, both a man and a woman, is in no hurry to marry, looks closely at the partner for a long time. Early marriage usually is not about them.

However, this sign is deeply domestic and does everything for the family’s good, taking an active part in raising children. It is in children that Aquarius sees the sacred meaning.

Since both partners are under the sign of Aquarius, they will not be bored at home. The sign is very lively, emotional, impulsive, and inconsistent. At times, partners can be difficult, but not bored.

This is a very strong couple since both partners easily adapt to their beloved one, their habits and do not try to change them.

Shakira is Aquarius, and Gerard is Aquarius too. The two met in 2010 when Shakira was filming the video for her song “This Time for Africa” for 2010 FIFA. And that same day, when she sang her final song, he noticed her. Their relationship was confirmed in 2011 when Gerard song with her on the stage. It didn’t take them long to expand their family since, in 2013, Shakira gave birth to their first child, and in 2015 to their second child. The couple was happy together, but Shakira didn’t want to get married. She claimed that it is better when Gerard sees her as a girlfriend, but not as a wife.

Unfortunately, in June 2022 the couple separated due to alleged cheating by Gerard.

Sam and Missy are both Aquarius. The couple met in 2003 in New York City theatre where both were performing. Trammell and Yager started dating three years later in 2006. Despite the fact both of the partners are serious in their relationship, they are not married. An excellent confirmation of the complete seriousness of their intentions towards their partner is the birth of two beautiful twin children in 2011. Sam is famous for his career success, but another significant achievement is his wonderful and happy family.

Josh is Aquarius, and Diane is also Aquarius. They started dating in 2002, and in 2003 Josh proposed to Diane. In 2004 the couple tied the knot, and a few months later, the press was rocked with the news about Josh’s arrest from his house. He was accused of abusing his wife. Then it turned to be a domestic quarrel, but not abuse. In 2013 the couple announced their separation.

According to the close circle of celebrities, the divorce was peaceful, and no nightmare happened. Josh was detained by the police many more times during their marriage, and they also had very different views on raising children.

His next marriage with Libra is more succesful.

Evan is Aquarius, and Emma is Aquarius. The couple met on the set of Adult World but only started dating after filming ended. In 2012, they became a couple. Although their couple was a youth idol, the relationship was not perfect. In 2013 the police were called in a hotel in Montreal after an altercation. When they arrived, they found Evan covered in blood and arrested Emma. Later she was released, and the couple seemed to start working on relationship problems, and after half a year, they got engaged. In June 2015, the couple broke off their engagement and broke up, but this time only for three months. In 2016, they broke up again, and Emma started dating another man. But this did not become the end of their relationship, and the couple was reunited. The relationship of the partners was not stable, but only toxic. This scenario was repeated more than once, but the final separation occurred in 2019 by mutual agreement.